What Do Insurance Company Ratings Mean? 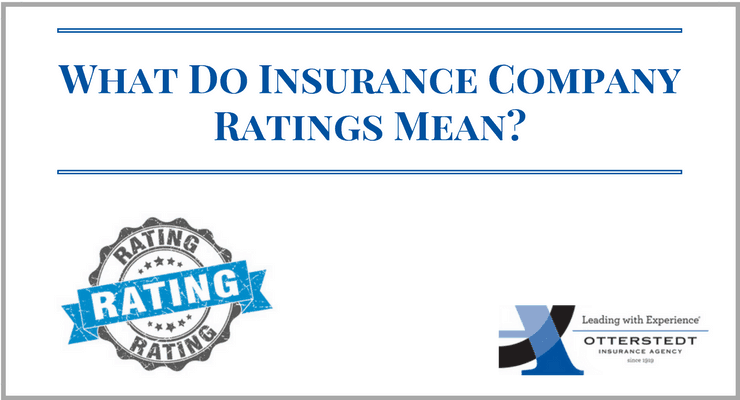 When considering an insurance company for your business or homeowner’s policy, instead of just looking at reviews, one factor you may wish to take into consideration is its financial rating. An independent agency determines an insurance company’s credit rating and gives their opinion on the financial strength of the company.

The credit rating of an insurance company isn’t an indication of how well the company’s securities will be able to perform for investors. It is, rather, an indication about how the agency rates them as to the likelihood of their paying out for policyholders’ claims. Each rating agency can be different in how they rate a particular insurance company and their ratings shouldn’t be taken as fact, but rather as their opinion.

There are essentially four primary financial agencies that give U.S. insurance companies ratings. These include:

Each of these four agencies will have their own rated company population, their own standards for rating, their own rating scale, and their own allocation of insurance companies across their scale.

For example, a credit rating of A++ means  “superior” and is AM Best’s highest credit rating, where AAA means ‘exceptionally strong’ with Fitch, “highest quality” for Moody and ‘extremely strong’ for Standard & Poor’s. It’s easy to mix up ratings too. For instance, while AM Best’s A+ rating means “superior”, that same rating for Fitch means “strong” and is their fifth best rating. A C rating by AM Best means ‘weak’ while that same C rating for Moody means ‘lowest rated’.

To indicate any minor rating variations from a different rating class, you will see numbers, as well as plusses and minuses used by each agency.

There are also external factors involved like diversification, competition and market presence that can be taken into consideration. Each rating you find from a particular agency will provide the meaning of its rating (high to low) and an analysis of each rating.

The financial stability is determined by an insurance company’s ability to pay claims and the company is rated with a letter and numerical rating.

It’s important that you don’t make your decision on an insurance company based on one agency’s rating since agencies often disagree. It’s best that you consider the ratings from at least a couple of agencies before you judge a company and decide whether you want to keep a current policy or buy a new one from them.

Further, insurance company ratings can and do change. Things like a company restructuring or an economic downturn (or upturn) can cause the rating to change. In some cases, such as when a company is changing names or becoming a subsidiary of a larger firm, there may not be a rating. Therefore, you may also wish to check the annual ratings of any company you may be interested in.

Because of the rating differences between agencies, comparing ratings can get confusing.  In addition to providing you with an up-to-date rating, these agencies may also provide you with information such as:

Things to Keep in Mind

Each financial rating is ‘forward-looking’ meaning that they are merely a prediction of the insurance company’s future ability of being able to meet their financial obligations whether those obligations are making claim payments to policyholders or contractual obligations they have to reinsurers.

Remember, a credit rating doesn’t guarantee the future performance of an insurance company. These ratings are mere assumptions from the agencies and could prove to be wrong in some cases. Because these ratings are only opinions on a company’s ability with regard to paying claims, they are not meant to indicate how the insurer conducts their handling of claims or other services. Just because a rating indicates that an insurance company is able to pay claims against policies held by them, doesn’t mean it will pay all claims effectively and efficiently.